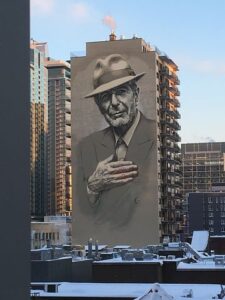 The last time I was in Montreal, Leonard Cohen, who had been dead two years, was on my mind.  How could it be otherwise for one who has admired his songs since his first album.  My daughter is named after perhaps his greatest song – Suzanne – (a heresy to some in light of this article about “Hallelujah”), and all his work has enchanted not just me but millions of other music lovers who desire depth in song.

“You want it darker/We kill the flame,” he sings, as he goes very deep indeed.  He is the king of darkness, perhaps matched only by Bob Dylan, who once wrote a seriously whimsical fantasy for the liner notes to John Wesley Harding:

‘And just how far would you like to go in?’ he [Frank] asked and the three kings all looked at each other. ‘Not too far but just far enough so’s we can say that we’ve been there,’ said the first chief.

Who prefers to say “we’ve been there” when they only took a walk in the park?

It’s easier to appreciate these singing poets at a superficial level without going where their art demands.  I say “their art” to distinguish the fallible men from their best creations.  Not entirely, of course, but to note that the artist often pales in comparison to his creations, which often come through him as much as he shapes them.

Both Cohen and Dylan, prophets of song, have been so popular because in their darkest visions they also offer a glimmer of hope, not much, but a bit of light presented in enigmatic lyrics.  In Cohen’s words: “There is a crack in everything, that’s how the light gets in.”  A crack that runs through everyone in a story that can only be told by transcendent visionaries.  Cohen:

And the light they offer is spiritual.  It is only available to those willing to follow them into hell, like Odysseus, Aeneas, and Dante who went far down into the underworld to bring back messages of hope.  They are what another master in words, the English author John Berger, calls “enclaves of the beyond,” windows in walls of words where faith pops out to overcome despair and fuels resistance to evil.  Little apertures onto hallelujahs despite life’s struggles and confusions.

Both Cohen and Dylan came to prominence in the 1960s when darkness and doom dominated the news. Both knew then and later that only a spiritual revolution offered hope, for spirit, secular or sacred, even when incognito, sustained the resistance to the political nihilism that was then rising to a crescendo.  Where it was absent, resistance collapsed.

Now we are undergoing the culmination of those years of mass slaughter in Vietnam, CIA assassinations of our anti-war and civil rights leaders, and a youth rebellion sadly coopted with drugs and other propaganda by the same CIA.  Cohen and Dylan sensed then what would come to pass.  Drug addictions, suicides, despair, loss of meaning, resignation, and a growing complacency as the population settled into a long sleep in the bed of consumer and war culture and the warfare state built its propaganda apparatus to the demonic digital level it is at today.

Perhaps they were very frightened.

Perhaps they were just poetic geniuses who never lost touch with God.

Cohen was a haunted man and his art was an effort to find relief from his conflicts; he called his writing a “harbor” where he could give form to and find shelter from the combat in his soul.  So being in his birthplace with his massive painted face staring from the side of a tall building, I naturally wrote an article about him, and much more.  In The Cell Phone and the Virgin: A Montreal Odyssey, I wrote the following from one of Cohen’s haunts, Old Montreal down by the riverside:

I stood in front of Notre-Dame-de-Bon-Secours Chapel (Our Lady of Good Help), looking up at the Virgin glimmering in the afternoon sun. The old port. The sailor’s church. Like Henry Adams, I thought of the powerful force of the Virgin throughout history.  Her protection across life’s tempestuous seas. And Leonard Cohen, the Montrealer, who as a young man would come to this chapel and sit in meditation and write his beautiful song, “Suzanne,” invoking “our lady of the harbor.” Leonard, who would stand in awe of the woman as protectress, mother, lover, killer, and muse:  As in the beautifully tuneful and complex song “Night Comes On”:

I went down to the place where I knew she lay waiting
Under the marble and the snow
I said, Mother I’m frightened
The thunder and the lightning
I’ll never come through this alone
She said, “I’ll be with you
My shawl wrapped around you
My hand on your head when you go”

And the night came on
It was very calm
I wanted the night to go on and on
But she said, “Go back, go back to the
world”

We were fighting in Egypt
When they signed this agreement
That nobody else had to die
There was this terrible sound
My father went down
With a terrible wound in his side
He said, Try to go on
Take my books, take my gun
Remember, my son, how they lied

And the night comes on
It’s very calm
I’d like to pretend that my father was wrong
But you don’t want to lie, not to the young

For one who knows something about his relationship with his mother, and his father who died when Cohen was nine-years-old, such words may seem a bit mawkish, a sentimentalizing of their actual relationship, a distortion of reality with a cryptic political message. This would be a misunderstanding of the artist at work; it would be to simplify a complex man, one who, like other conflicted artists (a redundancy?), takes personal relationships and transmogrifies them to find a temporary harbor in which to rest from a reality that roils them to their depths.  They sense, if do not explicitly say, that the personal can only be understood within the social.  Isn’t this what Homer and Virgil did?

Who is not roiled these days?

Was Odysseus roiled when he went to the underworld to consult Tiresias the seer about how to get home and met his mother’s ghost who, when he tried to embrace her, fluttered through his fingers, “sifting away like a shadow/dissolving like a dream”?

Was Aeneas roiled when he too went to the underworld and met his father’s shade whom he tried to embrace but felt “nothing, the phantom sifting through his fingers, light as wind, quick as a dream in flight”?

Cohen was a roiled and literate man, one who drew on the best in traditional literature.  He may have been from Montreal, but he was always a sailor lost at sea, a drowning man with no direction home who always quested after guidance to free him from his life-long depression.  He admitted that drink, drugs, religion, sex, or psychotherapy couldn’t free him.  But prayer as a toiling over words made into song granted him a temporary safe harbor from going under.

In the recent documentary about him – Hallelujah: Leonard Cohen, A Journey, A Song – we get to see the artist at work on this process.  The film chronicles the history of one of Cohen’s songs – “Hallelujah” – that became an obsession with him. We learn that he wrote 150 verses over the years and that the original song took five years to complete.  It was included on his 1984 album Various Positions, but Columbia Records refused to release the album, thinking it of inferior quality.  The album is actually great, with many wonderful songs.  It was later released on a smaller label and Cohen sang different versions of it at his concerts.  Bob Dylan covered it in the late 1980s, which no doubt attests to Dylan’s great musical insight and his affinity for Cohen, brothers in song. Then in 1991 it was covered by John Cale and in 1994 by Jeff Buckley, who did a most passionate version.

Over the years there have been more than 300 covers of the song and much debate about its meaning.  The mysterious poet/songwriter from Montreal had slipped into mainstream culture to his great amusement.  The song reached the Billboard Charts in 2016, the year of Cohen’s death.

The documentary is interesting in many ways, especially for its use of archival material from the Cohen Trust, including use of his notebooks, writing, performances, and interview footage.

Watching this excellent film, I was struck by how this song encapsulates Cohen’s spiritual journey.  For Hallelujah is a prayer in song, not in a mawkish way, but a prayer for our times when the old distinctions between the sacred and the secular have melded once again and people seek spiritual sustenance outside the traditional categories of Christian, Jewish, Buddhist, Muslim, Hindu, etc.  One may begin life in one tradition, as Cohen and Dylan did in the Jewish faith, but eventually many cross over to explore other faiths while remaining somehow anchored in their beginnings, whether those beginnings were explicitly religious or not.  For many, the roots of a spiritual journey lie in the examples of their parents and whether or not their lives were lived with unspoken spiritual integrity – acta non verba.

The theologian John Dunne wrote in his brilliant 1972 book, The Way of All the Earth: Experiments in Truth and Religion, the following:

Is a religion coming to birth in our time? It could be. What seems to be occurring is a phenomenon we might call ‘passing over,’ passing over from one culture to another, from one way of life to another, from one religion to another. Passing over is a shifting of standpoint, a going over to the standpoint of another culture, another way of life, another religion. It is followed by an equal and opposite process we might call ‘coming back,’ coming back with new insight to one’s own culture, one’s own way of life, one’s own religion. . . . The course such an adventure follows is that of an odyssey. . . . One’s life is finally the homeland.

This seems to me to sum up Cohen’s odyssey.  He was a man of his turbulent times who “experimented with truth,” in Gandhi’s words. Not that he was in any way another Gandhi, for he was, by his own admission, seriously flawed (who isn’t? Gandhi, too) and “not somebody who’s seen the light” and yet could still praise life with his “cold” and “broken Hallelujah.”  He turned poetry into truth and truth into poetry without sparing himself.  This took guts.  Like many poets, he could sound exalted and dejected simultaneously, morose and ecstatic (especially about sex and love), grating and sweet.  And like any cultural icon who is glorified by the media and whose personal life becomes somewhat of an open book, he is not an exemplar to follow.  But his work is, for it takes us into deep places where the heart’s desires meet and clash in a search for peace and reconciliation.

From his first song, Suzanne, to his last, Treaty, all his work, as he says in the documentary, is one piece.  The words of a man cracked into many pieces but who, from beginning to end, searched for wholeness with his songs.

As my four-year old daughter Susanne once said to me as we walked past a boarded-up church, “Papa, I think that when we die, God will put us all back together again.”  The words of a poet!  Mysterious and dark.

7 thoughts on “Leonard Cohen in Joy and Sorrow: “Hallelujah””