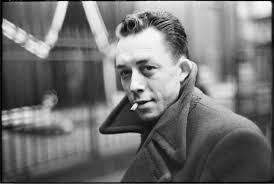 “Two categories of propaganda must be distinguished.  The first strives to create a permanent disposition in its objects and constantly needs to be reinforced.  Its goal is to make the masses ‘available,’ by working spells upon them and exercising a kind of fascination.  The second category involves the creation of a sort of temporary impulsiveness in its objects.  It operates by simple pressure and is often contradictory (since contradictory mass movement are sometimes necessary).”  – Jacques Ellul, The Technological Society

The French-Algerian writer Albert Camus’ great 1947 novel, The Plague, is a warning to us today, but a warning in disguise.  When he died sixty years ago at the young age of forty-six, he had already written The Stranger, The Fall, and The Plague, and had won the Nobel Prize for Literature.

The outward story of The Plague revolves around a malignant disease that breaks out in a town that is quarantined when the authorities issue a state of emergency.  After first denying that they have a problem, the people gradually panic and feel painfully isolated.  Death fear runs rampant, much like today with the coronavirus. The authorities declare martial law as they warn that the situation is dire, people must be careful of associating, especially in groups, and they better obey orders or very many will die.  So the town is cordoned off.

Before this happens and the first signs that something is amiss emerge, the citizens of the town of Oran, Algeria remain oblivious, for they “work hard, but solely with the object of getting rich.”  Bored by their habits, heavily drugging themselves with drink, and watching many movies to distract themselves, they failed to grasp the significance of “the squelchy roundness of a still-warm body” of the plague-bearing rats that emerge from their underworld to die in their streets.  “It was as if the earth on which our houses stood were being purged of their secret humors; thrusting up to the surface the abscesses and pus-clots that had been forming in its entrails.”  To them the plague is “unthinkable,” an abstraction, until all their denials are swept aside as the truth emerges from the sewers and their neighbors and families die from the disease.

“Stupidity has a way of getting its way;” the narrator, Dr. Rieux tells us, “as we should see if we were not always so wrapped up in ourselves …. plagues and wars take people equally by surprise.”

The American people are wrapped up in themselves.  Nor do they recognize the true rats.  They are easily surprised; fooled would be a better word.

Camus uses a physical plague to disguise his real subject, which is the way people react when they are physically trapped by human rats who demand they obey orders and stay physically and mentally compliant as their freedom is taken from them.

The Plague is an allegorical depiction of the German occupation of France during World War II.  Camus had lived through that experience as a member of the French Resistance.  He was a writer and editor of the underground Resistance newspaper Combat, and with his artist’s touch he later made The Plague a revelatory read for today, especially for citizens of the United States, the greatest purveyor of the plague of violence in the world.

We are all infected with the soul-destroying evil that our leaders have loosed upon the world, a plague of killing that is now hidden behind the coronavirus fear that is being used to institute tight government controls that many will come to rue in the months ahead, just as happened after the attacks of September 11, 2001.

Coronavirus is a perfect cover-story for the occupation of the public’s mind by a propaganda apparatus that has grown even more devious over the past 19 years.

Ask yourself: Where is the news about U.S. military operations in Syria, Afghanistan, Yemen, Iraq, eastern Europe, Africa, Latin America, Asia, etc.?  There is none in the corporate mainstream media, and little in the alternative media as well.  Have those operations ceased?  Of course not.  It’s just that the news about them, little that it was, has disappeared.

Now it is all about us and the coronavirus panic.  It is about how many of us might die. It is about stocking toilet paper.  For the rich, it is about getting to their second or third houses where they can isolate themselves in splendor. As I write, 150 or so Americans are said to have died of Covid-19, and by the time you will read this the number will have climbed, but the number will be minuscule compared to the number of people in the U.S.A. and those numbers will be full of contradictions that few comprehend unless, rather than reacting in fear, they did some comprehensive research.

But arguments are quite useless in a time of panic when people are consumed with fear and just react.

For we live in plague time, and the plague lives in us. But to most Americans, Covid-19 is the plague, because the government and media have said it is.  Like the inhabitants of Oran, the United States is “peopled with sleep walkers,” pseudo-innocents, who are “chiefly aware of what ruffled the normal tenor of their lives or affected their interests.”  That their own government, no matter what political party is in power (both working for “deep-state,” elite interests led by the organized criminals of the CIA), is the disseminator of a world-wide plague of virulent violence, must be denied and divorced from consensus reality.

That these same forces would use the fear of disease to cow the population should be no surprise for those who have come to realize the truth of the attacks of September 11, 2001 and the anthrax attacks that followed, both of which were used to justify the endless “wars on terror” that have killed so many around the world. It is a shock for so many people who can’t countenance the thought that their own government could possibly be implicated in the death of thousands of U.S. citizens and the release of the deadly anthrax, which we know came from a U.S. lab and was carried out by a group of inside government perpetrators.

When it comes to the plague-stricken deaths visited on millions around the world for decades by the American government, this must be denied by diverting attention to partisan presidential politics, and now the coronavirus that engenders fear, loathing, and a child-like tendency to believe Big Brother.  The true plague, the bedrock of a nation continually waging wars through various means – i.e. bombs and economic and medical sanctions, etc. – against the world, disappears from consciousness.  As U.S. Secretary of State Madeleine Albrecht said to 60 Minutes Lesley Stahl in 1996 when Stahl asked her if the U.S. sanctions on Iraq that had resulted in the death of 500,000 Iraqi children were worth it: “We think the price is worth it.”

For “decent folks must be allowed to sleep at night,” says the character Tarrou sarcastically; he is a man who has lost his ability to “sleep well” since he witnessed a man’s execution where the “bullets make a hole into which you could thrust your fist.”  He awakens to the realization that he “had an indirect hand in the deaths of thousands of people.”  He loses any peace he had and vows to resist the plague in every way he can.  “For many years I’ve been ashamed,” he says, “mortally ashamed, of having been, even with the best intentions, even at many removes, a murderer in my turn.”

The rats are dying in the streets. They are our rats, diseased by us. They have emerged from the underworld of a nation plagued by its denial.  Unconscious evil bubbles up.  We are an infected people. Worry and irritation – “these are not feelings with which to confront plague.” But we don’t seem ashamed of our complicity in our government’s crimes around the world.  For decades we have elected leaders who have killed millions, while business went on as usual. The killing didn’t touch us. As Camus said, “We fornicated and read the papers.”  He knew better. He warned us:

It’s a wearying business being plague-stricken.  But it’s still more wearying to refuse to be it. That’s why everybody in the world looks so tired; everyone is more or less sick of plague. But that is why some of us, those who want to get the plague out of their systems, feel such desperate weariness.

Yet the fight against the plague must go on.  Tarrou puts it thus:

All I maintain is that on this earth there are pestilences and there are victims, and it’s up to us, as far possible, not to join forces with the pestilences. That may sound simple to the point of childishness; I can’t judge if it’s simple, but I know it’s true. You see, I’d heard such quantities of arguments, which very nearly turned my head, and turned other people’s heads enough to make them approve of murder; and I’d come to realize that all our troubles spring from our failure to use plain, clear-cut language.  So I resolved always to speak – and to act – quite clearly, as this was the only way of setting myself on the right track.

These days, I keep thinking of an incident that occurred when I was a young investigator of sexually transmitted diseases, working for the U.S. Department of Health, Education, and Welfare through the Public Health Service as an epidemiologist.  My job was to track down sexually transmitted diseases by finding links of sexual contacts. One day I went to interview and take a blood sample from a poor woman who had been named as a sexual contact.  I knocked on her door on the third or fourth floor of a walkup apartment building.  She looked through the peep hole and asked who it was and I told her my name and what government agency I represented. I could tell she was very wary, but she opened the door. She stood there naked, a very heavy woman of perhaps 300 pounds. She nonchalantly welcomed me in and I followed her as she padded down the hall where she took a housecoat off a hook and put it on.

There is, as you know, an old tale by Hans Christian Anderson called “The Emperor’s New Clothes.” Although the emperor parades around naked, the adults make believe he is clothed.  Only a child sees the obvious. I was a 23-years-old naïve young man at the time of this unforgettable incident, but it echoes in my mind as a reminder to myself that perhaps that woman was unconsciously teaching me a lesson in disguise.  The year was 1967, and when I went out to get into my government car with federal license plates, a white man in a white shirt in a white car in a poor black neighborhood, a hail of bricks rained down toward me and the car from the roof opposite.  I quickly jumped in and fled as the ghettos were exploding. Soon the National Guard would be called out to occupy them.

Intuition tells me that although the emperor has no clothes and a vast PSYOPS occupation is now underway, too many are too grown-up to see it.

It’s an old story continually updated.  Like The Plague.

21 thoughts on “The Coronavirus Is Not the Plague: The Plague Is US”